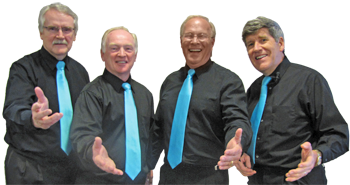 The quartet No Batteries Required was formed in the spring of 2011 and has been touring the Peninsula since looking for Bigfoot and someone to sing to. The group members are:

Bud Davies (baritone) — Bud is originally from Ephrata, Washington. He is a local dentist and is involved with music in theater, Barbershop Harmony, church and one man entertainment programs. Bud is a member of Sequim Sunrise Rotary and will be upcoming president. Bud and his wife Laurie have two kids who are in their 20’s.

Jim Muldowney (bass) — Jim started singing barbershop harmony in the early 80’s with the Sno-King Chapter in Seattle. After a decade or more, he moved to the Snohomish County Windjammer Chorus in Everett, where he got to travel internationally to Germany and Australia. One of the highlights of his barbershop singing career/hobby was singing in the Sydney Opera House in Sydney, Australia in the early 90’s. After meeting and falling in love with his lovely, baritone- singing Sweet Adeline wife Linda, Jim moved to Port Angeles where he works in sales at Ruddell Auto Mall. He eventually transferred his membership to the Strait Men Chorus, now known as OPMC. He has sung in many quartets over the years, on both sides of the pond! Currently he is enjoying this newest combination of guys in NBR as they build their repertoire together and entertain for local events!

Rich Wyatt (tenor) —- Rich retired in 2006 after working for Nintendo of America for 18 years. He started singing with OPMC in 2007. Rich and Jim were members of the world famous HVQ which disbanded because of their own Yoko Ono. Prior to HVQ, Rich’s previous singing experience was with a folk trio that won the Wee Pots (Shelton Junior Chamber of Commerce) talent show in Shelton circa 1964. When not singing with OPMC and NBR, Rich spends time making various wood carved projects, rides his bike, and “supervises” the restoration of his 1957 Chevrolet Nomad. Rich and his wife Jean live in the Happy Valley area of Sequim.

Rich Johnston (lead) — Rich started singing barbershop with the “Straitmen’s Chorus” in 1989 after working the spotlight on a Sweet Adeline’s show and hearing the “Straitmen’s Chorus” sing. Rich has sung with several quartets just for the annual show but NBR is Richs’ first serious quartet endeavor. Rich is a Port Angeles native and has lived here for 65 year. Rich retired in 2004 from Crown Z- Nippon after 37+ years and now enjoys more time with his wife of 41 years Mary Jo their 7 children and 9 grandchildren. Richs’ hobbies include barbershop singing, stock car racing and cutting firewood just for fun.